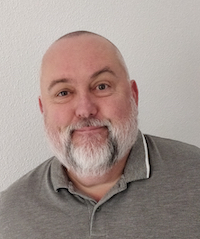 Favourite Album? If I MUST have one I guess it would be Paul Simon – Graceland
Favourite Song? Don’t have one
Favourite Film? The Great Escape
Favourite TV Series? Don’t have one – I’m very much a binge-watcher
Favourite Place Visited? Too difficult to say
Favourite Book? One Day in the Life of Ivan Denisovich – Alexandr Solzhenitsyn
Most Famous Person I met: Bill Clinton
Most Famous Person with whom would you most like to have dinner? Chris Tarrant
Favourite Food? Mealworms or Mussels and Chips
Favourite Sport? Hurling, Golf, Rugby and a passing interest in F1

Ger Sweeney has been working in the radio industry in Ireland and beyond since 1981.

In March Ger turned 51, and 5 days before that he marked the 37thanniversary of his first radio programme. Quickly doing the maths he was only days from his 14th birthday when he started.

Back in 1981 Ireland had many “pirate” radio stations as legislation to regulate and licence the industry did not come along until 1988. The first of the new radio stations commenced broadcasting in 1989.

Between 1981 and 1988 Ger worked for various stations in Limerick and Galway. One of the first of the new radio stations to come on air in 1989 was Clare FM, based in Ennis. Ger was part of that, in fact he was the first voice on air at the station. Ger spent 4 years with Clare FM on Breakfast until he moved in August 1993 to Limerick 95 after being head-hunted.

Ger returned to Clare FM in 1999 to present a nightly programme and was back on Breakfast from January 2000. His stint with Clare FM lasted until July 2002. At that point he took a break from radio as he had a young family and he wanted to explore other business interests that came along.