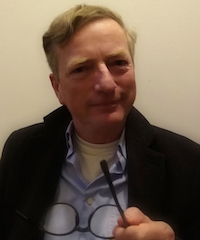 Favourite album? Pink Floyd – Dark Side of the Moon
Favourite song? GF Haendel – Lascia ch’io pianga
Favourite film? The Best Exotic Marigold Hotel
Favourite TV programme? Lilyhamer
Favourite place visited? Angkor
Favourite book? The Ragged-Trousered Philanthropists
Who is the most famous person you have ever met? Prince Charles, I suppose
With whom would you most like to have dinner? Noam Chomsky
Favourite food? Roast goose
Favourite sport? Rowing

Educated in Spain and England, Stephen Ritson is the host of Europe Today, Talk Radio Europe’s flagship current affairs programme. Since his first job as a diarist on the London Evening Standard, Stephen’s media career has spanned print media, television and radio, both in the UK and Spain.

He has also worked extensively as a translator and interpreter for organisations such as the Institute for Economic Affairs in the UK, The Heritage Foundation and the Cato Institute in the US and the Fundación para el Análisis y los Estudios Sociales in Spain. Consummately bilingual, he has translated books by, among others, former Spanish Prime Minister José María Aznar and Peruvian Nobel Laureate Mario Vargas Llosa. An avid traveller, he has visited nearly three dozen countries in the past three years alone, providing his listeners with a unique personal insight into some of the key issues confronting the world today.

Europe Today is broadcast live every weekday 12.00CET – 14.00CET, from our studio in Cologne, within easy reach of the EU’s key institutions in Brussels, Strasbourg and Frankfurt. The programme provides up to the minute breaking news from Europe and beyond as well as analysis of the motivations behind some of the most important stories in the world today. By referencing multiple sources and airing the opinions of a wide range of conflicting views, Europe Today aims to go beyond the traditional Western perspective of other mainstream media outlets.

This research is complemented by a spectrum of correspondents and associates on location whenever and wherever a story breaks. Despite its name, Europe Today is not just about Europe. Rather, it provides listeners with a rounded view of the whole world from a European perspective, often covering important stories that its competitors have missed and explaining frequently complex issues in easy to understand plain English. Europe Today. Delivering your Right to Know.