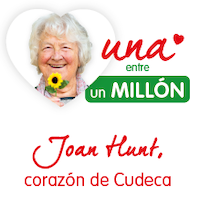 TRE – Talk Radio Europe Crowdfunding weekend to support the Cudeca “Joan Hunt, One in a million”campaign raised almost €49,381 doubled by sponsors to nearly €100,000 to create the first Paediatric Palliative Care Hospice accessible to all children and teenagers in Málaga.

The campaign aims to pay tribute to the recently deceased pioneer of palliative care in Spain and founder of Cudeca, as well as to raise €1,000,000 to create and manage the Paediatric Palliative Care Unit for 4 years. www.oneinamillion.es.

Martin Nathan, Chairman of Talk Radio Europe who devised the campaign explained that the name of the campaign “ONE IN A MILLION” was chosen in recognition of Joan Hunt the founder and driving force of Cudeca who was a ‘one in a million’ human being. While nobody chose to think about children suffering, this campaign was designed to ensure that they could be cared in a dedicated facility with the very best of care and their family by their side. The campaign continues throughout January and has so far raised almost €220.000 with more donations being received all the time.

The facility would include specialised comprehensive care and compassionate accompaniment for children and teenagers, as well as for their families to include not only parents, but also siblings, grandparents, aunts and uncles… the whole family. It would have an expert team of professionals (doctors, psychologists, nurses, social workers, physiotherapists, music, art and play therapists, teachers…) and volunteers, to care both at home, in our Cudeca Centre with the Paediatric Palliative Care Day Unit and following the conversion of Joan Hunt’s former house, in the new in-patient Unit. The generosity of sponsors and donors would forever be marked by display boards in the facility.

Special thanks go to the TRE hosts and presenters for their work and effort during the weekend, putting their communication expertise into service for Cudeca to help raise much needed funds. Interviews with Marisa Martín (Cudeca´s CEO and Medical Director), Susan Hannam (Cudeca´s Vice president and former Nursing Supervisor) and Esther Ráez (Communication and Fundraising of the Cudeca Hospice) made by TRE professionals such as Ger Sweeney, Howard Brereton and Hannah Murray. And a big thank you to Martin Nathan, TRE CEO for his commitment and leadership in bringing his team and Cudeca together to work for a good cause in the most effective way and huge professionalism.

Cudeca Cancer Care Hospice is a non-profit organization that offers professional medical care to patients suffering from cancer or other advanced illnesses, as well as support to their families. CUDECA uses the palliative care approach, a field in which it has long experience and expertise leading to its ‘special kind of caring’. CUDECA treats not only the physical suffering but also the psychological, social and spiritual aspect of the illness.

In 2020, CUDECA cared for 1,600 people and offered support to more than 2,200 family members. Since 1992, more than 17,000 patients have been looked after by the CUDECA Multidisciplinary Programmes: Home Care, Day Care Centre & Rehabilitation, In-Patient Unit, Psychosocial Programme, Counselling and Outpatient Consultation.

All CUDECA care is free of charge. The charity works to help patients keep their dignity until the end. CUDECA’s activity began in 1992 thanks to the work and dedication of English-born Joan Hunt, who was living on the Costa del Sol. After the death of her husband from cancer, she decided to dedicate her life to helping others facing the same situation. To this end she founded CUDECA. The palliative care team at CUDECA know that although they cannot add more days to life, they can and do add quality of life to days. To continue caring, CUDECA relies on the help of donors and supporters, and the work of volunteers.