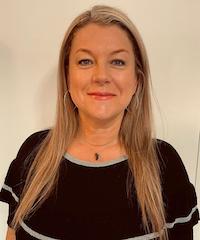 Favourite album? 4.5, Indigo Girls
Favourite song? Brighter than the Sun, Colbie Caillat
Favourite film? Forrest Gump
Favourite TV programme? Friends (or any quiz show!)
Favourite place visited? Sydney, Australia
Favourite book? Chris Evans’ autobiographies, It’s Not What You Think & Memoirs of a Fruitcake
Who’s the most famous person you have ever met? George Clooney (he’s recently bought a place in Marbella so we can spend more time together)
With whom would you most like to have dinner? Alan Carr (the comedian, not the self-help quitting smoking guy!)
Favourite food? Rosada and salad in a nice chiringuito on the beach
Favourite sport? Gymnastics

Hannah moved to Spain in 2003 after having travelled and worked abroad in a variety of jobs. Although never working in radio before, she did Performing Arts at college, and has always had an interest in the media.

She started at Talk Radio Europe in 2005 as a producer and researcher for the Magazine Show. Before long she was presenting both Stage and Screen and the Saturday Morning Breakfast Show. Then in 2008 she became the host of the daily Magazine Show, when she was interviewing up to 10 different guests each day! Some of her highlights include Noel Edmonds, Anne Diamond, Martine McCutcheon, Raymond Blanc, Louise Hay, Rick Stein, Beth Tweddle, Alexandra Shulman, and Sylvia Young. She hosted The Breakfast Show for 9 years and is now happily not setting her alarm anymore and is back interviewing interesting people in the afternoons.

Hannah has also been presenting The Book Show for over ten years, and has interviewed some fantastic authors including James Patterson, Sebastian Faulks, Jeffrey Archer, Wilbur Smith, David Baldacci, and Lee Child. The Book Show is every Thursday at 19.00CET, repeated Saturday at 20.00CET.