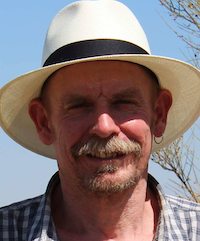 Favourite album? The The – Soul Mining  & K.D Lang and the Siss Boom Bang – Sing it Loud
Favourite Song? The The – This is the day
Favourite film? Lawn Dogs
Favourite TV programme? Breaking Bad or the West Wing
Favourite place visited? China
Favourite book? The life according to Garp – John Irving
Who’s the most famous person you have ever met? John Cleese
With whom would you most like to have dinner? Barack Obama or Johanna Lumley
Favourite food? Papas a la pobre
Favourite sport? Walking the dog

Howard had several holidays in Spain before he decided to leave Thatcher’s Britain in 1985.  When a student in Portsmouth he started his broadcasting experience presenting a variety of talk and music shows on Radio Victory, under the guidance of Paul Brown, who went on to head the IBA, as it was then called.

Once in Spain he was introduced to the owner of Nerja Spanish Radio, Alfredo Alcazar, and he started the first programmes in English between 7 and 8 am and 3-4pm when the Spaniards were either still in bed or sleeping the siesta.  The programmes were a great success so shortly afterwards, Coastline Radio was born as first 24 hour English Radio Station in Spain.  Later Howard moved to OCI in Marbella and when the station was threatened with closure decided to concentrate on his internet business  www.typicallyspanish.com. But radio is in the blood and now Howard is happily broadcasting on Talk Radio Europe doing the news, presenting ‘The Friday Conversation’ between 14.00-16.00CET, Spanish Sounds from 12.00-13.00 Saturdays, ‘The Sunday Supplement’ 10.00-11.00CET and the long running Radio in Black and White, Sundays from 09.00-10.00CET .