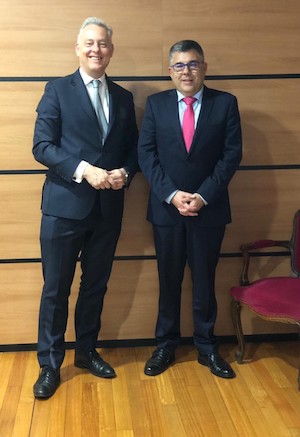 Her Majesty’s Ambassador Simon Manley, British Consul Sarah-Jane Morris and representatives of the British Embassy and Alicante Consulate met on Thursday with Government Delegate Juan Carlos Fulgencio Tejedor and representatives of the Valencian authorities to discuss issues of mutual interest; in particular the impact of Brexit on the 76,000 UK nationals living in the region and the millions more who visit each year.

Both HMA and the Government Delegate emphasised how the British and Spanish authorities in Valencia are working together to minimise the impact of Brexit on British citizens and to ensure that they are aware of what steps they need to take, including ensuring that they are correctly registered as residents.

Speaking to around 200 UK nationals at an outreach event in Valencia, Juan Carlos Fulgencio Tejedor’s key message was to “stay calm”. He emphasised the high level of coordination that existed between the Embassy, consulate and Spanish authorities and confirmed that in Valencia resources are being increased to make sure that UK Nationals are able to get their residency certificates. He also emphasised the importance of listening to official sources, rather than the rumour mill.

Consul Sarah-Jane Morris said “We have always had strong relationships with the authorities throughout Valencia and now it is more important than ever that we collaborate closely to mitigate the impact of Brexit on residents and tourists and to relieve the pressure on local authorities. Our meetings and the words of the Delegado at our outreach event were a clear demonstration of our shared willingness to work together and the warm welcome that Valencia has always provided to residents and tourists.

Both I and Valencian colleagues urge all UK nationals living in Valencia to ensure they are correctly registered with the authorities and making the necessary preparations for when the UK leave the EU, so that they can continue to enjoy living in this beautiful part of Spain.”

After the publication of the Royal Decree on Friday HMA Simon Manley said: “I am pleased to see that the Spanish Government has today announced a series of detailed Brexit contingency measures, should the UK leave without a deal. The Royal Decree offers important assurances on issues like residency and access to healthcare for the more than 300,000 British nationals who have chosen to make Spain their home, and for the many millions more British tourists who visit Spain each year.”

We urge all UK nationals living in Spain to ensure you are correctly registered and to stay up to date with the latest news, by signing up for email alerts and visiting the Living in Spain guide on gov.uk and following our Brits in Spainsocial media channels, including on Facebook.

Advice for UK nationals living in Spain can be found at: https://www.gov.uk/living-in-spain