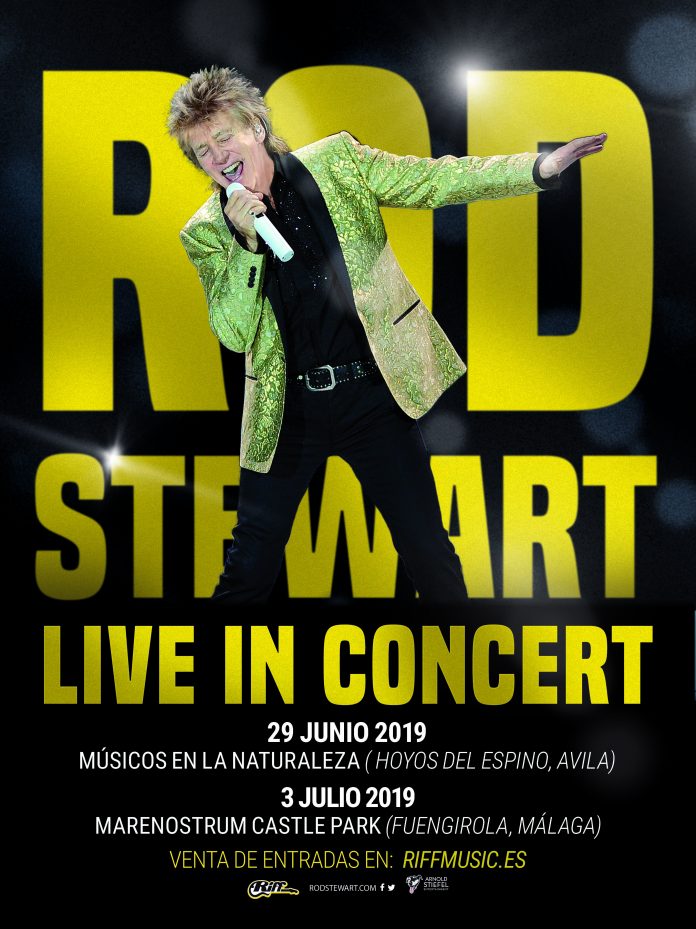 On July 3rd at Loma del Castillo Sohail, framed by its own castle and the Mediterranean sea, in Fuengirola.

November 19th 2018. With his signature voice, style and songwriting, Rod Stewart has transcended all genres of popular music, from rock, folk, soul, R&B, and even the American standards; making him one of the few stars to enjoy chart-topping albums throughout each and every decade of his career.

Rod’s 2019 shows promise to be filled with both his classics and his new hits, performed in his own distinctive style. As one of the best-selling artists in the history of recorded music, with more than 200 million records sold worldwide, his performance will include show stopping classics from his glittering career.

Concert-goers will also be treated to tracks from his soon to be released new album Blood Red Roses – a deeply personal 13-track collection of originals and three covers – which is released almost 50 years to the day from when he signed his very first solo recording contract.

Rod has earned countless of the industry’s highest awards, among them, two inductions into the Rock and Roll Hall of Fame, the ASCAP Founders Award for songwriting, New York Times bestselling author, Grammy™ Living Legend, and in 2016 he officially became ‘Sir Rod Stewart’ after being knighted by Prince William at Buckingham Palace for his services to music and charity.

Marenostrum Music Castle Park is set on the hillside of Sohail Castle, an incomparable setting in Fuengirola, with its own castle and the seafront of the Mediterranean. The last season of the festival had more than 50,000 spectators over all the concerts, confirming Marenostrum Music Castle Park as a serious concert venue. A venue at which the variety and quality of the performances were the dominant note of the festival and which has already brought together artists and groups of the likes of Vetusta Morla, Santana, Alejandro Fernandez, Luz Casal, El Barrio, Ozuna, Paco Candela and more…

The mayor of Fuengirola, Ana Mula, commented on the festival:

“Last year around fifty thousand people attended the Marenostrum festival, they came to the different concerts, not only the Fuengiroleños but people who come from all the surrounding districts, from the whole of Andalucia, from all over Spain, and from all over the world! They came to see our concerts and many stayed in our city in hotels, had dinner, had a few drinks … in short, a large number of people visited our community and enjoyed their stay, and in the end we all benefited. ”

Under 16 years old accompanied by an adult